Listen to the Interview with Pentagon Spokesperson Jerry Friedheim

GETTLIN: And I've discovered that even the Deep Throat, Woodward and Bernstein story leaves a lot of room for further reporting about what was really going on. And-- So obviously, if you're gonna look at what are some of the motives behind, quote Deep Throat, if there was a single person, I don't know that there was a single person, you have to look at Woodward's, you know, military and Navy background. I mean, it leads directly to that, to that point. FRIEDHEIM: Sure. He was definitely there, and he was moving in circles with-- You know, e-- As a junior officer, as a briefer, but obviously it's somebody that they thought was sharp enough to do those things. GETTLIN: Mmhmm FRIEDHEIM: He was moving with those guys, Moorer, Haig, the NSC staff, and other military types. GETTLIN: Right.

Listen to the Interview with Defense Secretary Melvin Laird

GETTLIN: Are you saying that you weren't aware at the time, though, that he was briefing Haig. Is that what you're saying or you were aware? LAIRD: I was aware that Haig was being briefed By Woodward, yeah. GETTLIN: You were. At the time that he was over there at the Penta-, OK LAIRD: He was there on temporary assignment. GETTLIN: For a year, I think he was there. LAIRD: He was there for a temporary assignment.

GETTLIN: See the thing about it, he had contacts at the White House, from his time that he went over there at the situation room. Now I've talked to a number of people, including people at the NSC, and they said that part of the job that Woodward had when he went over there is that he briefed Al Haig. Did you-- were you aware of that? MOORER: Sure. GETTLIN: You were. MOORER: Of course. GETTLIN: Well, why was-- MOORER: [INAUDIBLE] GETTLIN: Why was he briefing Haig over there? MOORER: Because I was on the telephone with Haig 8 or 9 times a day about whatever's going on, the same thing with Kissinger. GETTLIN: Yeah MOORER: And it's the job of a uh, people in the Pentagon to keep the President informed. GETTLIN: Yeah MOORER: The President was Commander in Chief, and Haig was simply the channel that got into, it went from Haig [INAUDIBLE] to the President.

Radford was asked what they were trying to do; he replied:

"Well, bringing Nixon down. Really, getting rid of Kissinger-
Kissinger was a real monkey wrench in things."

Written by Super User on 19 October 2018. Posted in Articles.

"The Forty Years War: The Rise and Fall of the Neocons from Nixon to Obama" introduces Fritz Kraemer 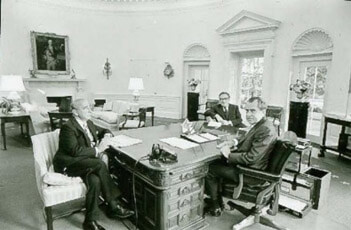 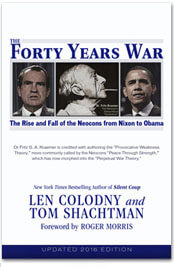 Why This Is Significant: Trump Adopts Kraemer Theory

Kraemer is the father of the "provocative weakness theory," more popularly called by Neocons as "peace through strength." Kraemer believed that power came from military strength and that any sign of weakening military resolve invited trouble from our rivals. President Ronald Reagan first adopted Kraemer's theory in 1981, and it has been a force ever since.

Watch 1990 Kraemer Video on C-SPAN discussing his vision and the ramifications on the world after the Gulf War.

Click to order now. Packed with fascinating revelations, fresh insights, and a wealth of new material, THE FORTY YEARS WAR examines the trajectory of the American neoconservative movement from Vietnam to Iraq…and exposes the little-known military strategist who masterminded this ideological crusade.